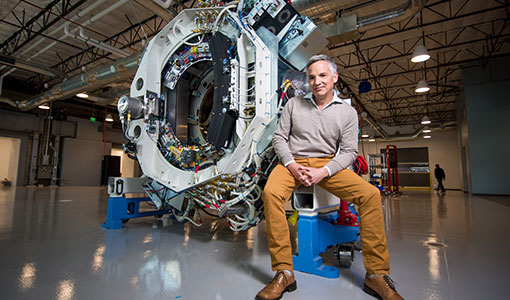 RefleXion Medical is preparing to ramp up production of its cancer-fighting machine, which leverages positron emission tomography (PET) imaging to target cancer with radiation therapy. The Hayward-based company hopes to have FDA clearance for its medical machine by year’s end, propelled by a $60 million credit facility from Oxford Finance LLC granted earlier this month. In preparation, RefleXion is opening a new 50,000-square-foot manufacturing site later this month, adding to its two building footprint at Mount Eden Business Park. Typically, cancer patients receive PET scans, with the diagnostic imaging taking about a half hour to materialize fully. Patients then undergo radiotherapy, generally from an external beam outside the body. RefleXion’s new biology-guided radiotherapy technology instead uses the thousands of individual emissions that formulate a typical PET image to identify the tumors and then personalizes the patient’s radiotherapy directly toward the cancer at the same time.

“No other company is using the cancer itself to direct radiation therapy and because of our unique workflow, cancer becomes an agent of its own destruction,” said Todd Powell, CEO of RefleXion. By 2020, cancer is predicted to become the leading cause of death in the United States. While radiation therapy has been used for many decades for early stage cancers, the treatment is not used for cancers that have spread because of the challenge of identifying targets and then confidently getting radiation to those targets while sparing healthy tissue, Powell said. The company’s inventive approach to battling cancer stemmed from co-founder Sam Mazin’s time as a medical imaging PhD student at Stanford University. Mazin attended a lecture over in the radiation oncology department, and he was struck by the idea of pairing the best tool for seeing cancer with radiation treatment.

– To read the article in its entirety, click to open the PDF below.