Using a tumor’s own biology to tackle cancer is a promising new area of treatment and presents a novel opportunity to deliver personalized medicine. On June 16, leading radiation oncologists and medical physicists from around the U.S. gathered at RefleXion Medical’s Sanjiv “Sam” Gambhir Memorial Learning Center for the company’s first cancer symposium.

The symposium “Tumor Biology Leads the Way to Personalized Radiotherapy” opened with a dedication of the Learning Center, which was named after Sanjiv “Sam” Gambhir, M.D., Ph.D. Dr. Gambhir, a world-renowned physician-scientist who is often referred to as “the father of molecular imaging,” made pioneering contributions to early cancer detection.

The symposium “Tumor Biology Leads the Way to Personalized Radiotherapy” opened with a dedication of the Learning Center, which was named after Sanjiv “Sam” Gambhir, M.D., Ph.D. Dr. Gambhir, a world-renowned physician-scientist who is often referred to as “the father of molecular imaging,” made pioneering contributions to early cancer detection. RefleXion CTO and founder Sam Mazin, Ph.D., expressed his personal regard for Dr. Gambhir. He noted that the creation of the Learning Center was a fitting tribute to honor Dr. Gambhir’s life’s work as well as for his role as an advisor and early supporter of RefleXion’s biology-guided radiotherapy (BgRT)*.

Mazin and RefleXion’s President and CEO Todd Powell welcomed the more than 60 experts from 31 cancer centers to the symposium. Attendees toured RefleXion’s manufacturing facility on its Hayward campus where they saw firsthand the intricacies of the RefleXion® X1 machine. One tour stop included a physics panel Q&A moderated by Dr. Mazin that included RefleXion early adopters Murat Surucu, Ph.D., Stanford University School of Medicine, An Liu, Ph.D., City of Hope Comprehensive Cancer Center, and Bin Cai, Ph.D., University of Texas Southwestern. Additional tour stops included an in-depth overview of the X1 with David Larkin, senior vice president of research and development, an education and training session with Dianne Kendall and Chris Schuman, and an in-depth look at the novel PET detectors, a key component of the X1 architecture that will one day enable BgRT.

Robert Timmerman, M.D., professor and chair of the Department of Radiation Oncology at UT Southwestern Medical Center, presented “PULSAR–The Adaptation of SABR Toward Personalized Medicine.” Dr. Timmerman pioneered PULSAR, a method to deliver personalized radiotherapy. Patients receive “pulses,” which are potent stereotactic ablative radiotherapy (SAbR) treatments that can trigger change in the tumor, in its microenvironment and in the patient. Pulses are given weeks or months apart so that clinicians can track a tumor’s response and personalize follow-up treatment accordingly. Following the event, Dr. Timmerman tweeted, “Enjoyed speaking at this event. Thank you for having me.”

This novel treatment paradigm corresponds well with RefleXion’s BgRT. BgRT is the first and only technology that uses emissions generated by cancer cells in response to an injected radiotracer to guide the delivery of radiotherapy. RefleXion’s BgRT received Breakthrough Device designation from the U.S. Food and Drug Administration (FDA) for use in lung tumors because of its potential to detect and then immediately treat moving targets. RefleXion hopes BgRT will one day become a new standard of care for radiotherapy to treat all visible cancer sites and create a new treatment option for patients with metastatic disease. 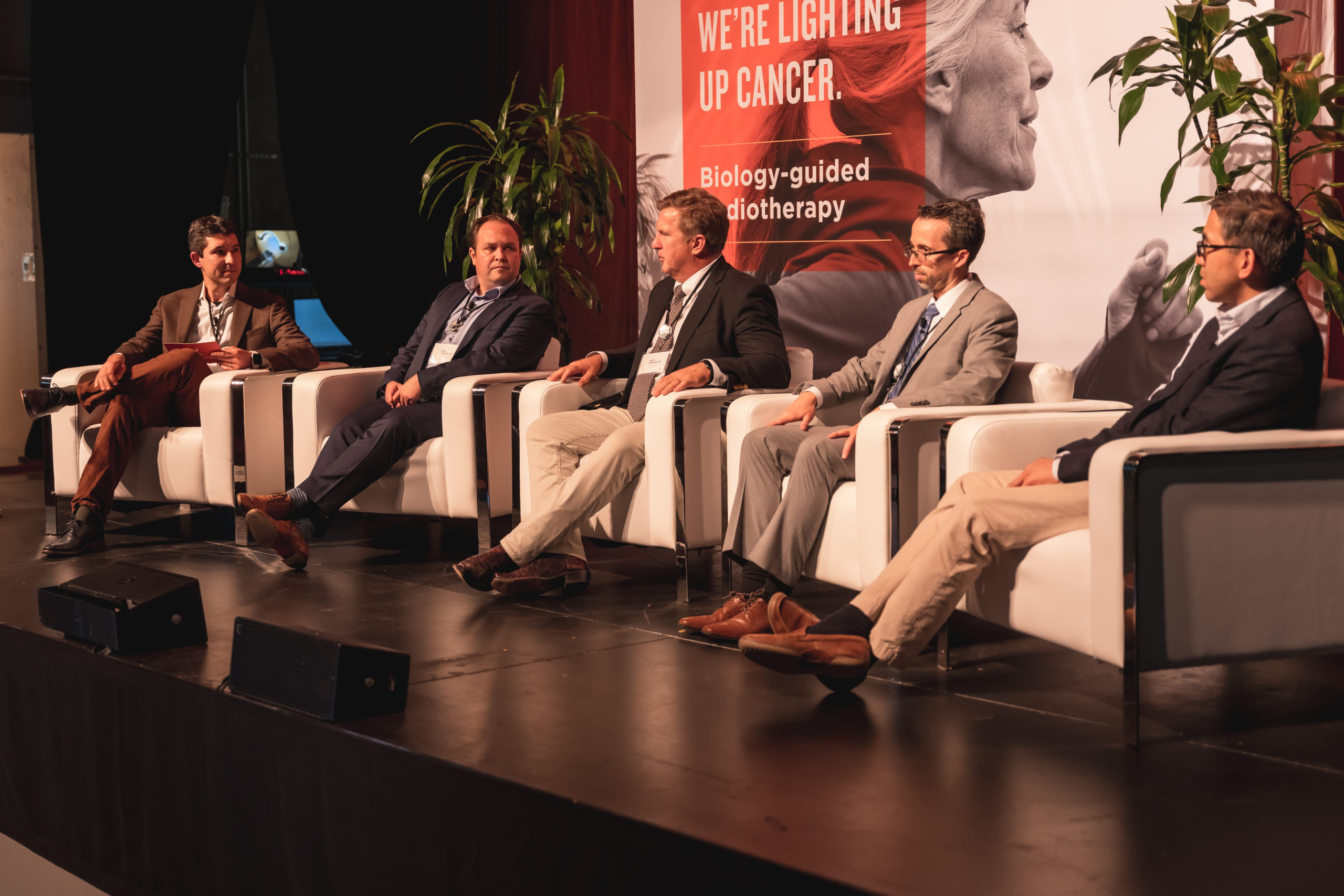 The symposium also included a panel discussion moderated by RefleXion’s CMO Sean Shirvani, M.D., entitled “Using Tumor Biology to Unlock 21st Century Radiotherapy,” which featured Daniel Chang, M.D., associate professor of radiation oncology from the Stanford Cancer Institute, Terrence Williams, M.D., Ph.D., professor and chair of the Department of Radiation Oncology at the City of Hope, and Dr. Timmerman. In closing, the audience heard from Thorsten Melcher, Ph.D., chief business officer about the company’s radiotracer program, as well as an update from Phil Aulson, vice president of operations and service about the process of installing the X1 and educating customers.

“The symposium was held to allow a number of the country’s leading researchers and clinicians to present their unique approaches to radiotherapy that unleash the power of cancer cell biology to dictate the treatment plan,” said Powell. “The event was a success, and we’re fortunate to have had so many leading clinicians and researchers together at one event. We’re committed to exploring how together we can harness tumor biology to deliver personalized treatments to cancer patients so that they have opportunities for better outcomes.”

“A huge thank you to our impressive presenters for such informative and inspiring talks,” tweeted RefleXion Medical after the event. This was the inaugural Cancer Symposium hosted by RefleXion at its headquarters location.

*The RefleXion® X1 is cleared for SBRT/SRS/IMRT. BgRT is pending regulatory review and is not commercially available.