Twenty-five hundred miles northeast of RefleXion’s Hayward, California headquarters, Jermaine Cuyler directs sales for the East Coast division, which includes the northeast, the Midwest and mid-Atlantic regions. As a director of sales, he educates prospective clients about RefleXion and its X1 machine and helps them determine whether the technology fits their needs. “I wear a consultant hat initially. I explain the technology and the fundamental clinical premise, and if there’s mutual commonality in long-term goals, then I shift to a sales hat to guide a long-term partnership,” he says.

Well-spoken and charismatic, it’s easy to see why Cuyler has had an impressive sales career. But sales wasn’t the career path he originally planned. He started off studying business teacher education at Robert Morris University just outside Pittsburgh, where he also played college football. “I wanted to be a secondary school accounting teacher, but after student teaching, I quickly realized that I don’t have the patience,” he says.

“I liked the idea of wanting to wake up every day and be proud of what I was doing while still being able to make a living. A sales position in the pharmaceutical or medical space seemed to be something that would drive my passion towards service.”

Cuyler set his sights on sales thanks to mentorship by professors and business professionals who had gotten into sales shortly after college. He planned to work in either pharmaceutical or medical sales. He admits that as a young college graduate, he was “financially motivated” but says he “liked the idea of wanting to wake up every day and be proud of what I was doing while still being able to make a living. A sales position in the pharmaceutical or medical space seemed to be something that would drive my passion towards service.”

His sales career began in Washington, D.C., at Paychex, a payroll company. “I found out I needed some experience in sales prior to getting hired within a medical or pharmaceutical company. I worked with Paychex for a couple of years and built my sales resume,” he says. He started in pharmaceutical sales at GlaxoSmithKline, where he worked for three years before becoming territory sales director at Accuray Inc. for eight years, then district sales manager for Varian Medical Systems for four years. He joined RefleXion Medical in February 2020.

“I am excited about new unique technologies that serve an unmet need,” says Cuyler. “What drew me to RefleXion was the fact that here was a novel way of delivering radiation that was going to address a new patient population. That in and of itself was the reason why I decided to make the jump to RefleXion: the technology and its potential impact for late-stage cancer patients.”

Although Cuyler works remotely, he says it’s easy to remain connected to the pulse of RefleXion’s culture. “I appreciate RefleXion’s diversity, with women in leadership and its diverse sales team.” Even though he joined the company just before the pandemic, he says, “the culture of RefleXion still emanated. I never felt like I was on my own, although I was the employee located farthest from the company headquarters. Our leadership team does a fantastic job of cultivating a culture where we feel like a family.” He also enjoys the collegiality of the sales team and appreciates his boss. “We work as a team as we go out to prospect and educate. We’re always sharing new ideas with each other rather than being competitive,” he says. “I feel blessed to have Len Lyons as my boss and leader of our sales team. He’s so practical, he’s honest, and you can be honest with him.”

Cuyler also feels connected to RefleXion’s mission because he—like many others who work for the company—has felt the impacts of cancer personally. His father is a prostate cancer survivor, but he’s had other family members who have died from lung cancer or prostate cancer that metastasized. “Everyone plays a role in the fight against cancer. It’s why I see each cancer program and every vendor in our space as partners, not competitors. I see RefleXion’s role as broadening the patient population that might one day benefit from radiation therapy that can treat more late-stage patients,” he says.

A typical workday consists of emails, phone calls, and presentations with potential prospects and current customers. He travels regularly to meet with existing or prospective clients. He might give a presentation to a particular department that might be unfamiliar with RefleXion or have meetings with current users to discuss their implementation process or their current treatment process. The key to selling a multimillion-dollar radiation therapy machine, he explains, is “to educate the users on what your capabilities are and what clinical needs your device will meet. Customers ultimately make the decision.”

Cuyler feels fortunate to have been mentored by some older, established sales professionals who helped him evolve both professionally and personally. “Those people were absolutely responsible for my growth in this industry. Had they not taken me under their wing, I might have been lost in the shuffle,” he says.

He’s also grateful to his parents for his work ethic. His parents grew up in the segregated South—his mom in Mississippi and his father in South Carolina. “Neither one of my parents ever sat in a classroom with a white person because they weren’t allowed to. And yet, they moved North for job opportunities. They met in Rochester and lived in the suburbs,” he reflects. “My brother and I were in predominantly white classrooms [in Rochester] growing up. This was an unknown territory for my parents, yet they never instilled upon us that we were any different. Their work ethic comes from being entrepreneurs. They have imparted to us that no matter what the environment is, you can take control of what you do and how you grow within that situation.” Cuyler remains close with his parents, who still live in Rochester, and his brother, who’s only 18 months older. “My brother and I grew up best friends. He relocated from Atlanta to Pittsburgh three years ago to be closer to me and my parents,” he says.

Cuyler has volunteered and mentored extensively. In 2022, he was appointed to the board of directors of the Women’s Center and Shelter of Greater Pittsburgh, with whom he has donated and volunteered with for many years. “It’s exciting and certainly makes me feel fulfilled. I’m not focused solely on my career and how I can ascend at an organization, I’m engaged in what I am doing for people in my community,” he says. “Service is something that’s long been important to me. It’s been illustrated to me in my life by my parents.” 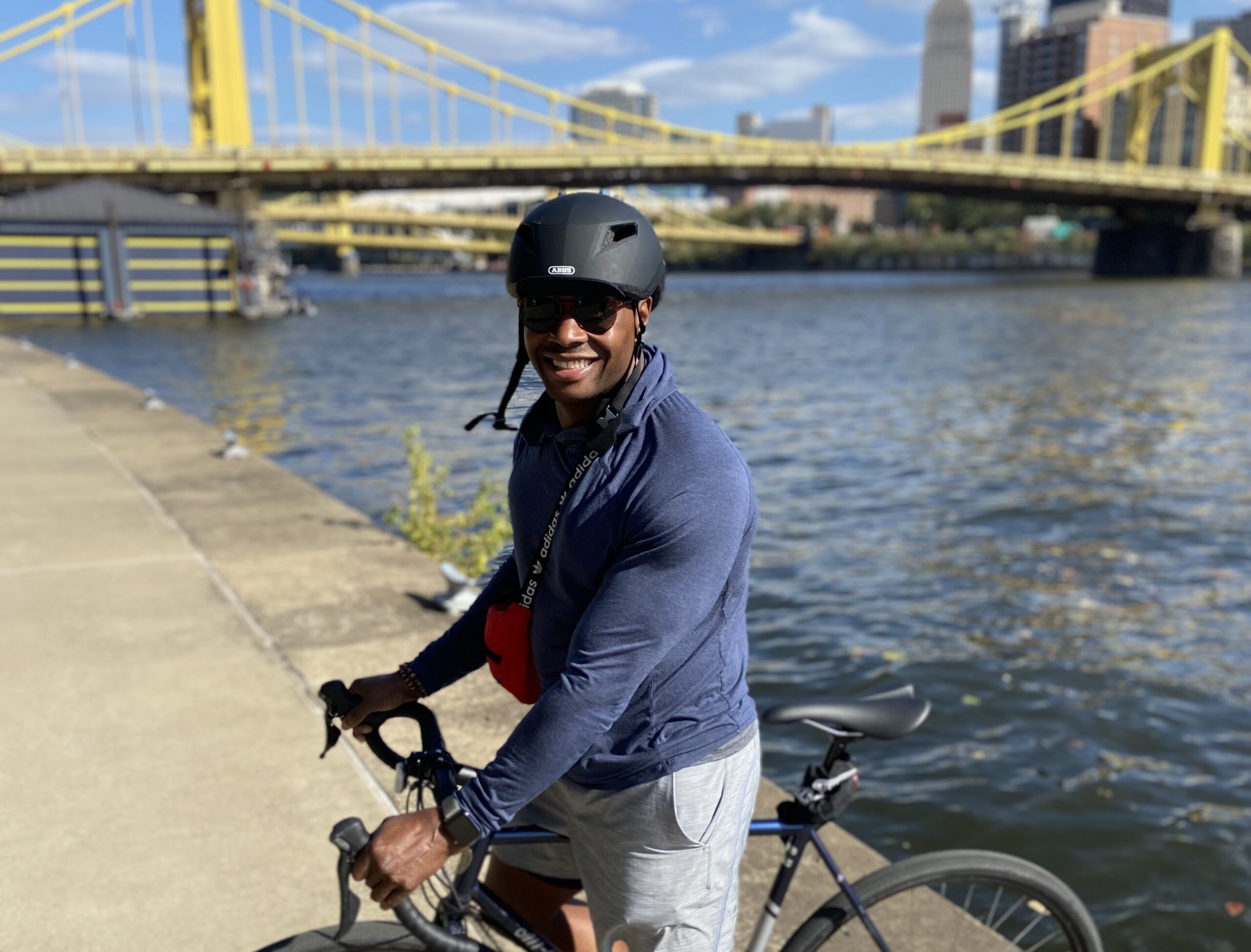 Outside of work, Cuyler enjoys running, biking, golfing and other outdoor activities in Pittsburgh, a city he loves. “The neighborhood I live in is called Deutschtown, located on the North side. I feel like it’s a gem here in the city where there’s a confluence of really great neighbors. It’s very diverse socioeconomically and racially. It’s a small melting pot of a community where we all look out for each other and know each other,” he says. At home, he does home renovation projects, and he loves to travel, whether visiting family in Rochester or exploring new places. “I can remember going to Manhattan when I was nine years old and just loving the big city and bright lights. I felt comfortable in that environment. There were just tons of people everywhere, and it was busy and fast-paced,” he says. He also wants to travel more internationally, including visiting Greece, Scandinavia and China.